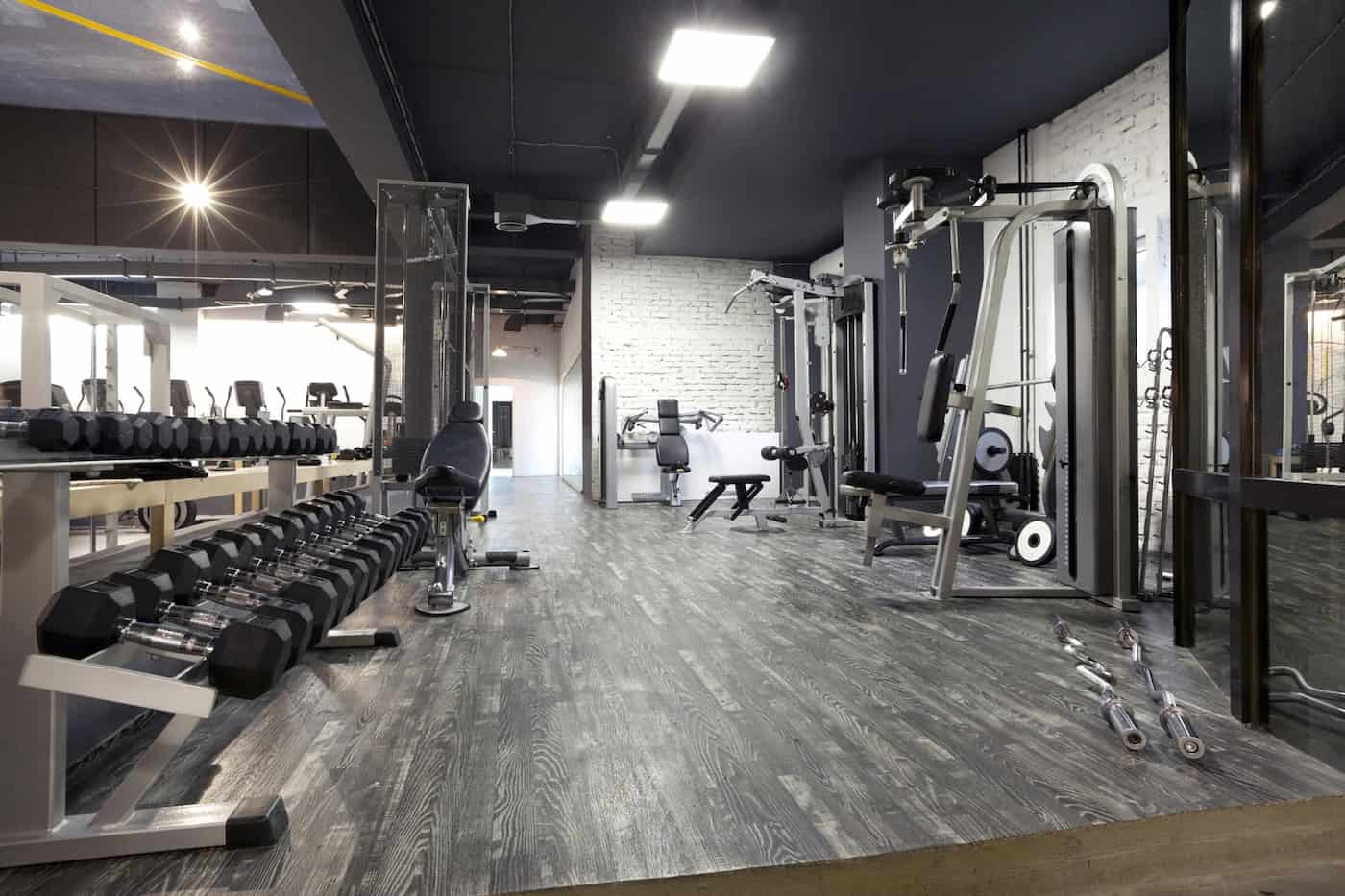 What happens when we train with weights?

The skeletal muscle system (or most systems in the body, for that matter) adapt to specific demands placed upon it. We train with weights in order to overload the muscles and skeleton with a workload slightly greater than what they’re accustomed to doing. Then, assuming adequate rest and the availability of the necessary nutrients, you get fitter and stronger over the next few days. More muscle tissue means greater strength, higher metabolism, increased immune system response, better posture, resistance to injury, and a host of other health-related goodies. If you stop stressing the muscles and bones, they get weaker. Use it or lose it!

Remember — you don’t develop while you’re working out, you develop while you’re sleeping, using what you’ve eaten. Get adequate recovery after each workout, and stay fed. Otherwise you become overtrained, stale, sore, tired, injured, and generally unpleasant to be around. All the hard, determined work you do in the gym will be for naught.

The most efficient way to train muscles is to pick exercises that use a whole bunch of them. Exercises that involve large groups of muscles and movement at more than one joint are called compound movements. Exercises that involve only one joint are commonly called isolation exercises, although I prefer the term single-joint movements — it’s more descriptive, and muscles never really work in total isolation anyway. A majority of your strength training should consist of compound exercises for the major muscle groups. That’s how your body functions in real life activities, so it makes sense to train it that way. A list of common compound exercises for various body parts is at the bottom of this page.

Muscles move bones. Adding resistance to the bones’ movement puts more stress on the muscles. When performing resistance exercises, it’s important to focus on what bones are moving where. Don’t think about where that chunk of iron in your hand moves, concentrate on moving parts of your body into a particular position. The weight (or tubing, or water, or machine, or whatever you’re using for resistance) just makes it more difficult to move particular bones. Get it? Read this paragraph again. Learning this concept is a crucial part of understanding weight training.

Now that the purpose of weight training is clear, let’s discuss in a little more detail what some of the major muscle groups do. We’ll start with the muscles of the legs and hips:

The muscles in the front of the thigh are called the QUADRICEPS (“quads”). Their main function is to straighten the knee. They are also involved in hip flexion, which is pulling the knee up towards the chest. 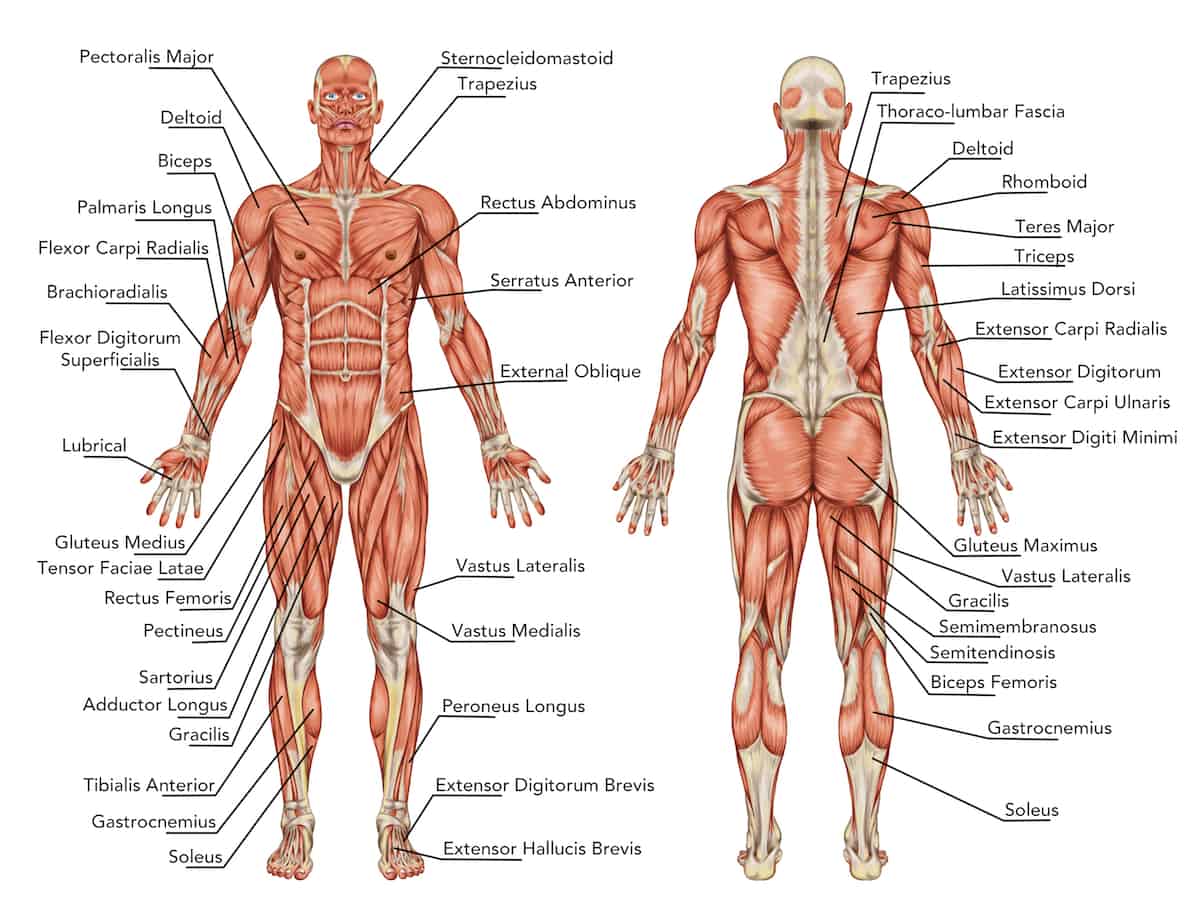 The HAMSTRINGS are the muscles in the back of the thigh. They have two functions: bending the knees, and, in conjunction with the GLUTES (butt muscles), they pull the leg behind you (a movement known as hip extension). The glutes are also responsible for pulling the leg out away from the body. This is called hip abduction.

The muscles on the inside of the thigh called the HIP ADDUCTORS. They pull the leg inwards toward the centerline of the body. This movement is called (you guessed it) hip adduction.

In the lower leg there is a group of muscles known as the CALVES which push the foot down (point the toes). The group in the front of the shins is called the DORSIFLEXORS. They pull the foot and toes up toward the shin. So you can sound intelligent at cocktail parties, the movement your calves produce (going up on your tip-toes) is called plantarflexion. The opposite movement is dorsiflexion.

Moving up to the torso, the chest muscles, or PECTORALS (“pecs”) pull the arms inward toward the centerline of the body, like a hugging motion. The shoulder muscles – DELTOIDS – pull the arms out away from the body.

The muscles that run along the back of the spine are called the SPINAL ERECTORS (erector spinae if you like Latin). They are also known as the “lower back” muscles, even though the group runs all the way up to the skull. The spinal erectors, together with some deeper muscles, bend the spine backwards — a movement known as spine extension or back extension.

The abdominal muscles consist of the RECTUS ABDOMINIS, the OBLIQUES, and a bunch of deeper stuff that all move and stabilize the spine. The rectus abdominis (“abs”) runs from the sternum down to the pelvic bone. Its function is to round the spine, thus pulling the ribcage and pelvis together and flexing the torso. There aren’t really “upper” and “lower” abs, so beware of any instructor or instructional material that promises to “target your lower abs”. The obliques are diagonal muscles on the sides of the waist. They are mainly responsible for twisting and side-bending movements. A good abdominal strengthening program should contain all three movements — spine rounding, twisting, and side bending (not necessarily all in the same workout); more advanced practitioners should make ample use of multi-planar diagonal movements too. The musculature of the trunk is crucial for stabilization of the spine. For back safety and correct posture, core strength is very important.

The BICEPS are the muscles in the front part of the upper arm. They bend the elbow (flex the arm) and also turn the palms up (supinate the forearm). The TRICEPS are opposite the biceps, and they straighten the elbow (extend the arm).

Here’s a list of the major muscle groups and some common exercises for each: