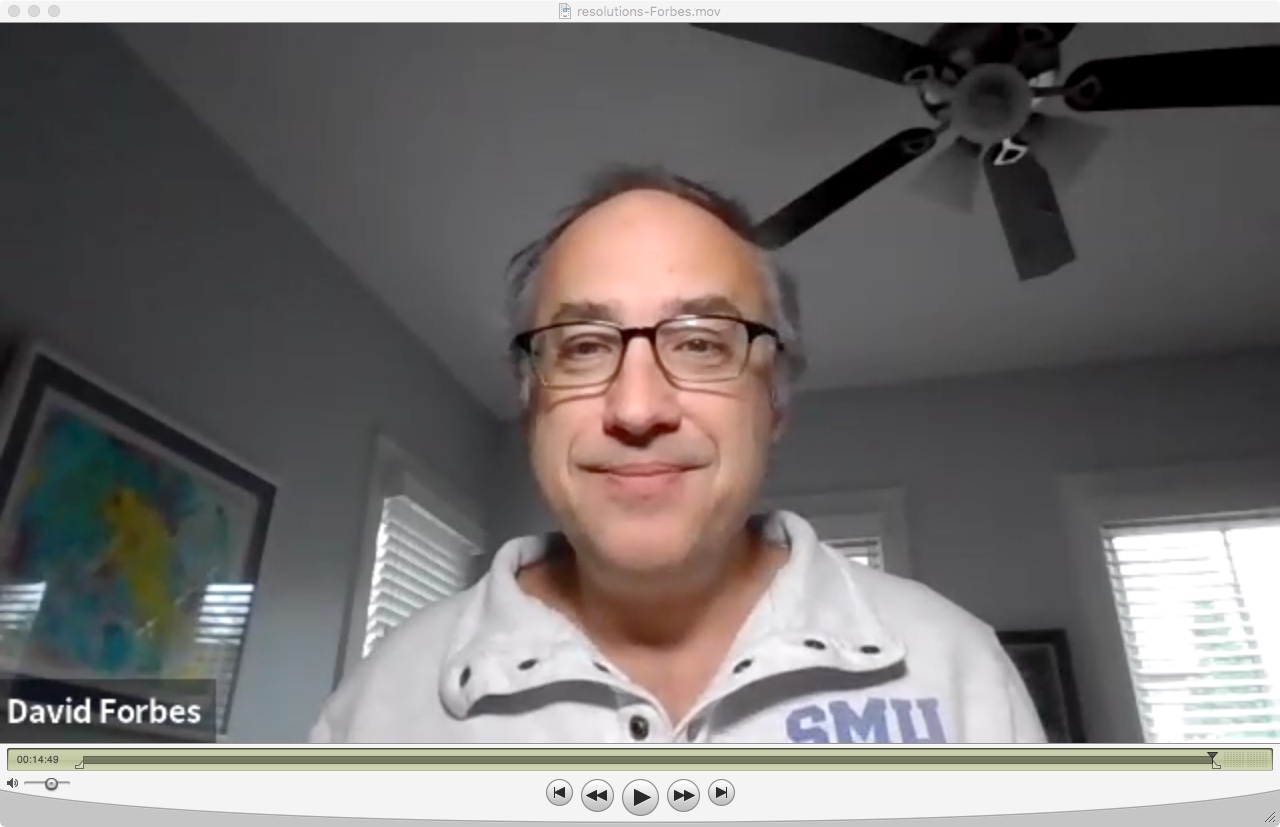 Your new year’s resolutions, which all come pouring in people’s lives about now. Almost invariably, and I include myself with this, for sure they take the form of “Here’s a certain particular thing I feel like I want to accomplish. And so here’s the next task that I’m going to try to commit myself to that I’ve had difficulty with before.”

The weight loss programs have a massive spike right now; any gym membership place will tell you that probably one of their biggest huge upticks is early January. And so that’s our way of approaching this thing. It’s next step time, I guess I ought to do something different. And so, what should that be?

So, what strikes me about that is, first of all, it’s almost completely about doing. It’s about a certain task or achievement. And there are all kinds of laudable and wonderful things about that. I do think it’s worth noting that the percentage of failure on that is massively high. The numbers of things that drop off the radar after a couple of months is huge. And I’m not sure that some of that isn’t because of what we’re actually doing and how we’re approaching it.

If it’s about a task, and if it’s about something that I feel like I’ve got to do, that invariably is something that’s hanging on from the past and hasn’t been seen as successful. Then we’re automatically, by definition, starting from a standpoint of lack, a standpoint of not- enoughness. I’ve already defined myself in that moment as a failure that needs to do better. I’m lacking in something critical that I don’t have, and don’t do very well. Let me see if I can give it another go, and finally, be the kind of person that I wish I were.

So if we’re starting from that premise, is it going to go so well, for us? Is that part of the reason that those things end up falling by the wayside? And even if they don’t, where are we inside that with that? What’s actually happening on the inside? Am I feeling great about myself? Or am I feeling like, okay, here I am with another dose of not accomplishing and failing at this or that. And while I really ought to be a better person, let me see if I can climb out from under this pile one more time, before I collapse, like I have all the times before.

I’m just not sure that’s a great energy, or a recipe for whatever we’re going to call success. We’re thinking, “Okay, if I can make this happen, I’m going to be better.” And I’m not positive we really end up necessarily that much better if where we’re starting is from not enoughness and lack. We cannot approach it from “Here’s what I don’t have right now” and “Here’s what I’ve got to achieve.” We have to come at it from “I am this already.”

The difference in motivation and the successful change of behaviors and how we live, flows enormously more strongly from a place where we are not seeing ourselves at a place of lack, and ‘not-enoughness’ and having to meet the bar of expectation of change. But instead, we’re that already.

How many times are we saying to ourselves, we are this or that? That has some kind of negative valence to it. I certainly do it to myself, in all kinds of ways, and I hear it day in and day out as a health care practitioner. I can’t count the number of times I’ve had somebody plop down and as they’re talking about their stresses in life and say, “But you know, I’m just an anxious person. I’m just a depressed person; been that way all my life, I’m just an anxious person.”

Even to the point of defining it, “It’s something that, you know, I’ve just, I’ve got a couple of genes that are determining this, and this is who I am. And so now, how do I cope with that fact?” Wow, that, within that moment, right there is a novel, a volume of information that is critical to understand about ourselves.

What we’re starting with in that moment, is enormous. It literally is like putting ourselves under a pile of boulders, and saying, now I’ve got to climb out from under it. That weighs tons and tons and tons. But I put myself there, I put myself under those. That’s my starting point. So where is our starting point? Where are we starting any kind of approach to change? And so, it’s always got that paradox in it. I’m trying to “change something”. And yet, it may be that our way of approaching that that’s the healthiest and works the best is to already be in our own minds, in that place, to already envision and be what it is that I think I’m trying to change into: Am I feeling like I am I enough already? Or am I always starting from a place of lack? And what I have to become, in order to finally be enough? The central challenge is how easily we slip out of any kind of internal place of enoughness into a place of lack and not-enoughness. And operate from there, minute by minute, hour by hour, day by day.

If I keep coming back to, “I am enough already. I’m a healthy person. I’m a good person. I have good intentions. I intend loving things for myself, and for those around me. I genuinely do. Oh, that’s who I am.” When I’m in that state, I act differently. I say things differently. I engage my fellow human beings differently. All kinds of things naturally follow, if I stick with that. If I blow past that fulcrum moment, and let the habitual old place of lack and not enoughness and past failures, be the genesis point for the next moment, it’s all gonna look like, “Okay. All right. Let’s gear up. Okay, I got some things I need tackled here. Yeah. Well, I hope I….alright, I gotta, I gotta I gotta dig in. I gotta I gotta…”

Immediately they’re sitting out here, there’s chatter. “Yeah, you said you were gonna do that more this past year Dave. Good for you. You’re gonna, you’re gonna try again. But you know, you’re probably just gonna do the same thing, you’re gonna be saying this again a year from now, which you said before.” All these little chatter voices inside telling me, “Yeah, this is you just keep failing at this. Why don’t you just give up? Want to go find something else to do?”

I’m noticing a lot of the voices. Hmm. Wow. My whole insides crunch and slump. I start feeling not so much like getting out of bed. I’ll just slow down here. What’s on TV today?…

That, that whole energy for moving toward, what are some things that I do want to actually do. My motivation drops out. I’m actually sabotaging the very particular things that I just simply like to do, I’d like to do them. It’s a great goal. But my chatter will take the knees out from under that really quickly when it is coming from a sense of, of lack, and failure and not enough.

Or we’re constantly forgetting who we are. I harken back to Dan Jones, my mentor, and one of the things that he used to say which was “Everybody, every single one of us, is unconditionally loving, wise, intelligent, capable when we are not in distress. It is our natural state.”

We need to be remembering who we are. Not “I want to get back to that or be that”, but “I AM that.” I’m trying my best. I’m doing my best today. In every moment, with good intentions.

Because we are all the time, even when we’re acting from distress, all we’re trying to do is figure out our way home and how to feel better. That’s all we’re doing. It just may be that it’s coming from a place and in a way that’s just not very effective. But we’re still trying to do the same thing or still our intention is to get to a better place, to feel better. Always. Always. In every moment, that’s what we’re doing.